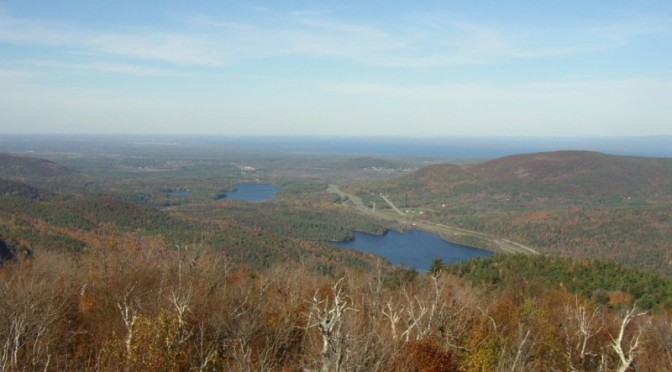 A short, steep hike up panoramic views of the Champlain Valley, Giant Mt and Whiteface.

With beautiful 360 degree views of the High Peak and the entire Lake Champlain Valley, Poke-O-Moonshine is a must hike.  Despite its short 2,180 feet and 1.2 mile trail, the trail’s relentless steep grade makes the hike modestly difficult.

Located in the northeastern corner of the park, seconds from The Northway (Interstate 87), Poke-O-Moonshine is a popular destination for hikers, photographers, rock climbers and ice climbers.   A quick but strenuous hike is rewarded with great views.  Rock and ice climbers come from miles around due to it’s large open cliffs.  A state campground at the base of the cliffs, but has remained closed in recent years due to budget cuts.

Hikers have two options, either the 1.2 mile Ranger’s trail, starting at the southern end of the state campground or the longer 2.4 mile former Jeep trail used as access to the Observer’s Cabin – now called the Observer’s Trail.  The first is steep with one very nice overlook.  The latter is more modest (same elevation change, twice the distance) but without any overlooks.  Parking for this trail is just short of 1-mile south of the campground/Ranger’s Trail on Route 9.

Both trails converge at the old Observer’s Cabin, since torn down but with the foundation partially remaining.  From here the trail climbs towards the summit, with a nice High Peaks overlook.  The final push to the summit is rewarded by a majestic view to the south and after climbing the fire tower – 360 degrees.

From the fire tower the mountains quickly flatten and the city of Plattsburgh can be seen on most days, noticably the runway of the former US Air Force Base.  If it is exceptionally clear, views to Montreal and it’s surrounding hills are possible.  Towards the east is Lake Champlain with the hillside city of Burlington visible in front of the Green Mountains.  To the west Giant and Whiteface are the most prominent High Peaks, with many others visible too.

The fire tower was restored and if climbed while a steward is on duty provides a glimpse of how observers pin pointed fires in the days before GPS, planes and cell phones.

Two trails are available.  Most use the Ranger’s Trailhead from the south end of the campground.  The observer’s trail is far gentler (grade and footing) and makes a nice ski trail in the winter.

Ranger’s Trail (1.2 miles to summit): Located just south of exit 33 off The Northway, parking is along the roadside.   There is ample parking for parking on both sides of the road, but be sure to be well off the road as this is a state highway.  We trail-side has a steep embankments so be careful not to pull off too far, though additional stone was recently added.

The trail register is at the south end of the campground near the end of the chain link fence.   A well-defined foot trail can be seen around the fence.  While registering, grab a information phamplett provided by the Friends of Poke-O-Moonshine.

The trail begin to go up quickly, interpretive marker posts numbered 1-11 along the way (see pamphlet) roughly coincide with the tenths of a mile.  The first 8/10ths of a mile are the steepest, so go slow and rest at the various lookouts.  Between markers 4 and 5, the trail is relatively exposed and particularly dangerous in icy conditions.  Once over the scramble, take a minute to enjoy the first major overlook.  You are now on top of the first layer of cliffs.

From here the trail grows steeper without break until marker 8  and the former Observer’s Cabin.  Take your time and watch your footing.

From the old Observer’s Cabin to the summit is far more relaxed with a very nice view of Whiteface and the High Peaks just shortly after the cabin.  You can walk this overlook for about 150 feet before regaining the trail.  This makes for a nice picnic spot if the open summit is too windy.

The summit can sometimes be very busy.  The eastern side of the summit contains additional, quieter overlooks with gorgeous views of Lake Champlain and Vermont.

Observer’s Trail (2.4 miles to summit):  Approximately a mile south of the campground/Ranger’s trailhead and double the length of the Ranger’s trail, the Observer’s trial is a significantly gentler hike.  Due to it’s roots as a jeep trail, the hike is wide with few washouts.  Unfortunately that comes at the cost of overlooks, but the trail does pass two beaver ponds before meeting the Ranger’s Trail at the Observer’s Cabin.

Located near the old Oberserver’s Cabin is the Upper Tiers lean-to.  This makes a good spot to camp to view the morning sunrise.   There are no other designated camping spots along the trail and given the steepness of the terrain there are few spots that make good legal site 150 feet from trail/water.

There is an outhouse located near the lean-to/Observer’s Cabin.  Marked with directional signs, it is located a short walk down the Observer’s Trail.