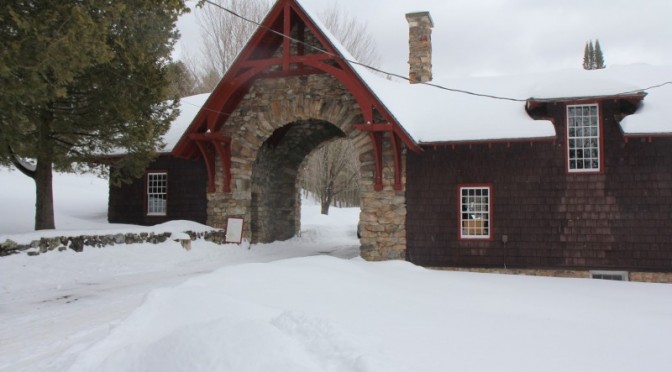 A remote 1800s Great Camp open to the public.

Camp Santanoni is one of the few remaining Great Camps in the Adirondacks and is now owned and being restored by New State.  The camp complex began in 1892 in the southern high peaks region, as a getaway for Robert C. Pruyn, an Albany banker and businessman.

Unlike many Great Camps, Camp Santanoni is a modest camp.  While it is very large, it contains no bowling alleys, movie theaters, or other city conveniences.  It was designed as a place to be outdoors, and enjoy the Adirondacks.

At its height of use, the “camp” comprised of 12,900 acres, 3 complexes (Gate Lodge, Farm and Great Camp) and roughly 50 buildings.  The center of the camp is the 16,000 square foot Main Lodge.  Built in 1892-1893 with 1500 logs, it was the focal point for all future development.  The center of the lodge is the two-sided walk around field stone and granite fireplace.

The camp included a self-sustaining farm, with over a dozen buildings, and the gate lodge, which is where the chief caretaker lived.

The camp remained in the Pruyn family until 1953, when it became to much for the family to maintain.  It was sold to another family until it was sold to the state in 1972.  The state was primarily interested in the relatively untouched 12,900 acres.

In 1972, New York State purchased the 12,900 acre Santanoni Preserve.  Originally the camp was to be demolished and returned to its natural state.  Through preservation efforts, the building complexes and carriage road at Camp Santanoni were classified as “historic” under the Adirondack State Land Use Master Plan and spared from demolition.

Sadly the camp was originally neglected and in disrepair.  In the early 1990s the decision to either restore the camps or tear them down had to be made.  “When I first went there, the first week I almost left. It was so daunting.” said master carpenter Michael Frenette, who has done most of the work at Santanoni since 1998.

Though grants and other funding, the camp has been incrementally restored over the past 20 years, primarily focusing on stabilization in early years.

On July 15, 2004, a fire destroyed the primary barn as part of the experimental farm complex.

The camp and property is publicly owned and you may visit the grounds anytime.  Over the summer, a handful of buildings are open from late June through Labor Day.  During the winter there are typically three ‘winter weekends’ – Roughly mid-January, mid-February, and mid-March.

Getting from the trailhead (Gate Lodge) to the camp is 5 miles along the carriage road.  The road leads gently up and over a modest hill before descending down to the Main Lodge.

During the summer bikes are a great idea.  During the winter, skis are the preferred method of travel.  Hiking or snowshoeing is an options, but plan your time accordingly since it is just shy of 10 miles round-trip.  During the summer a horse-drawn wagon is another option.

Since this is a forest preserve, pets are allowed.  Please keep pets under control, particularly around other visitors and historic buildings.

From Northwest: From Tupper Lake, take Route 30 South to Long Lake; East on 28N to Newcomb.

From Southeast: From Adirondack Northway (I-87), Exit 26 at Pottersville; West on 29 (Olmstedville Road) through Olmsteadville to 28N; Northwest on 28N to Newcomb.

From Northeast: From Adirondack Northway (I-87), Exit 29 at North Hudson/ Newcomb; (Blue Ridge Road) West on 28N to Newcomb.