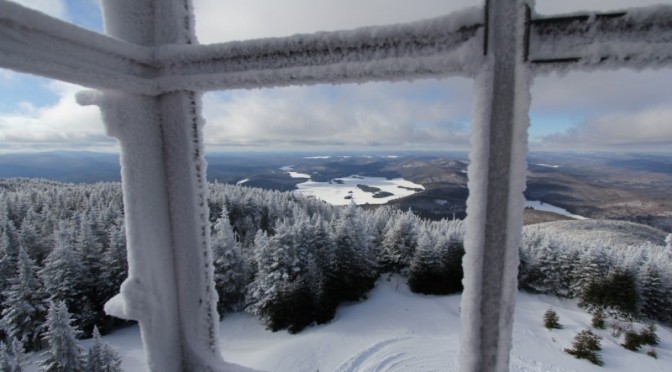 A steep hike to a panoramic view of Blue Mountain Lake and the western high peaks.

At 3,759 feet, Blue Mountain towers over all its neighbors and provides magnificent views in all directions.  The High Peaks, the southern peaks, Blue Mountain Lake, Lake Eaton, Raquette Lake and many other locations are visible from the summit and fire tower.  Justifiably, Blue Mountain is one of the most popular hikes in the Adirondacks with about 15,000 hikers annually.

Trailhead (2 miles to summit – 1,400′ elevation gain) The trailhead is where State Route 30 / State Route 28N travels over Blue Mountain on its way to Long Lake.  There is parking for about 20 cars.  From the parking lot there are two trails, one leading towards Blue Mountain (red markers) and another towards Tirrell Pond (yellow markers).  The register is in the back right of the parking long, with clear arrows towards the trail.

The trail starts gently meandering along a former logging road before turning up.  The trip up is reasonably steep for about 0.5 miles.  Fortunately there is a break at this point (halfway up mountain) and the trail goes around the mountain gaining no elevation (0.4 miles).

From here it is another reasonably steep 0.5 miles before the trail begins to level off near the summit.  A final gentle summit walk leads to the fire tower.

Despite it popularity, most hikers do not realize that most of blue Mountain is private lands, including the trails.  Annually the private landowner, Upper Hudson Woodlands (ATP) , grants permission for trail usage. There is only one public trail up Blue Mountain (described above).  The roads up the mountain are not for public use, including hiking on them.

Blue Mountain dominance over its surrounding made it an ideal place for a fire tower.  In the 1870s geographical surveys were conducted from the summit.  Originally the summit was covered in trees, but many were removed so that sightlines to other peaks could be created.  Additionally a survey tower and leantos was built on the summit.  A survey benchmark can still be found near the tower.

In 1917, like many wood towers across the state, it was replaced by an AerMotor LL‐25 Fire Tower.  It was also 35 feet tall, but made of durable galvanized metal and still stands today.

With fire observers also comes the need for cabins.  Four were been built on the summit of Blue Mountain over the years, with the latest one built in 1975.  It still standing on east side of the tower, but is not open to the public.

The tower was one of the last towers in operation.  It closed in 1990 and was left to rot.  It would not go unmaintained for long though, in 1993 plans began to rehabilitate the tower for recreational use.

Blue Mountain Fire Tower was the first public-private preservation partnership and has served as a model for similar tower restorations across the state.  In 1994 the DEC, with the help of others, restored the fire tower.  That same year, the first paid fire tower steward in the state was hired – a SUNY ESF student.  Today the Friends of Blue Mountain lead restoration efforts.

Formerly a Cold War radar facility topped Blue Mountain for use in national defense.  The large concrete slabs are all that remain.  Also, the summit has high voltage power and emergency backup generators.  The power poles/lines can be seen looking north/northwest near tower. The summit cabin is one of the few across that state that has power.

From South/Southwest: Coming from Old Forge, continue on State Route 28 into the hamlet of Blue Mountain Lake.  Continue through town staying straight (left) at the route 30 intersection.  You will now be heading north on State Route 30/28N and headed steeply up Blue Mountain.  When you reach the summit, the trailhead is on the right.

From South/Southeast: Coming from Indian Lake / North Creek, continue on State Route 28/30 into the hamlet of Blue Mountain Lake where you will reach a stop sign (small gas station on left).  You will now be heading north on State Route 30/28N and headed steeply up Blue Mountain.  When you reach the summit, the trailhead is on the right.

From North: Coming from Long Lake, take State Route 30/28N south towards the hamlet of Blue Mountain Lake.  You will see the mountain many times as you travel south.  There are a few signs to watch for, particularly “Trailhead ahead” and “Blue Mountain Lake”.  Also immediately before the trailhead is a sign telling trucks steep grade ahead, use low gears.  Trailhead is on your left.

GPS Address: Easiest is use: 9097 New York 30, Blue Mountain Lake, NY 12812, which is the Adirondack Museum, a few hundred feet south of the trailhead.

No designated sites along the trail or on summit. Either create a legal site in the woods (150 feet from trail and water) stay at nearby hotel or campground.

The hike is reasonably long and steep, but has few difficult scrambles and cliffs.  Most active kids should make it to the top if taken slowly. Caution should be exercised if climbing the fire tower.

Bring them. It is a moderate hike with few cliffs and scrambles.  Please leash your dog for this one, particularly on a popular weekend day.  Expect to see other people and dogs.

Water, lunch and a jacket for the summit.

Ice, Ice and more ICE!! Unless very snow-covered (not that often), expect the trail to be primarily ice-covered.  The trail is worn to bedrock in many places and water seeps from the surrounding soil onto the trail, where it then freezes.  It is not uncommon to see ice over a foot thick.  Further the trail is on the south-western part of the mountain which is warmed by the afternoon sun, then freezes at night.

There are no significant scrambles, rather many long ice flows.    Crampons should be considered mandatory.  Yaktrax or similar work if there is little snow.  Otherwise the crampons on a good pair of shoeshoes should be worn.  The tower itself is open year round, but can be very icy.  Use caution if attempting to climb.

If you have anything to add, please leave it below.  Feel free to ask a question too.  Happy Journeys!